A Short History Of The World Famous Swiss Army Knife

The Swiss Army Knife is recognized the world over. The bright red handle with a small white cross, concealing multiple blades and fold-out tools has been the go to pocket knife for boy scouts, army regiments and of course the everyman too, for over a century.

Invented in the 1880s, the official ‘Swiss Army Knife’ is still made exclusively in only two factories in Switzerland. More than 15 million knives leave their warehouses each year.

It all started in Ibach, in 1884. A young Karl Elsener and his mother, Victoria, opened a cutlery cooperative. This small enterprise would produce the first knives sold to the Swiss Army, with the original model being called the “Offiziersmesser”, or Soldier Knife.

(Interestingly, the term “Swiss Army Knife” was coined by US Servicemen in World War II, which proved to be a lot more marketable than the plain old ‘Soldier Knife’).

The knife was designed specifically for troops who needed a foldable tool that could open canned food and aid in disassembling a rifle, (as well as provide a bit of whittling to while away the hours).

It immediately proved popular with soldiers, however that first incarnation did receive complaints. So Elsener went back to his shop and made it even better, by adding a corkscrew of all things.

Overall, those early knives contained much of what we still love about the Swiss Army Knife today: a versatile pocket blade, a reamer, a can opener, and a screwdriver. All of which was folded neatly away inside an oak handle.

The other half of the Swiss Army coin originates from around the same time. The Delemont company was founded as a cutler in the 19th century and was later bought and modernized by businessman Theodore Wenger, to become Wenger, S.A.

The Swiss army later split its contract for the knives between Victorinox and Wenger in 1909. The Swiss Army knife trademark was then shared between both companies.

However, although Wenger and Victorinox are distinct company entities, both are actually now owned by the Elsener family.

Troubles for the Swiss Army Knife in recent years

Recent troubles in the industry – particularly the post-9/11 airport climate, which made it difficult to take small knives onto planes – saw Victorinox buy out its main competitor in 2005.

Victorinox, did not escape the aftermath of 9/11 unscathed however. The Swiss Army knife was shorthand for the Swiss culture from where it stemmed. The company had a sizable presence in the travel and luggage industries, and was a constant seller at duty-free stores prior to the attacks. With the Swiss Army Knife easy to use a concealed weapon, the post attack climate was very difficult for the company.

“Our company has never been as hard-hit as it was by the Sept. 11, 2001, terror attacks in New York and Washington,” CEO Carl Elsener Jr. noted in a 2013 press release. “We lost over 40 percent of our business. Airports sent vast quantities of the knife back to us.”

However, the company saw the downturn through, with the descendants of Karl Elsener (his great-grandchildren to be precise) overseeing the production and managing of both Victorinox and Wenger – two companies that continue to employ thousands of Swiss workers.

On the subject of employment, Victorinox have a rather unique claim. The company has never had to lay off an employee. To avoid this they set aside profits during boom periods to supplement recessionary periods, as well as temporarily contracting employees to other companies as outsourced labour during recessions.

A wonderful achievement that sheds light on the attitude of the company towards its employees. In 2009, Victorinox boasted over 100 employees who had remained with the company for over 40 years.

“We consider our employees as one big family, and we have always tried to apply a strategy that allows us to overcome normal economic cycles,” said Victorinox President and CEO Carl Elsener Jr. 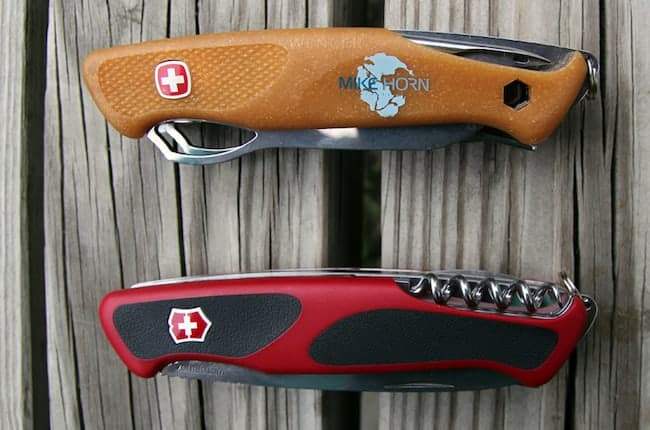 Both companies continue to stretch the utility of the Swiss Army Knife. Wenger Swiss Army Knives come in dozens of types. The company sells simple pocket knives with all the traditional blades, (including the good old serrated edge knife), right through to multitools like the Mike Horn Knife, a half-pound daddy of a knife with two blades and a pair of pliers built in.

Victorinox on the other hand have a full range of technological knives, that include laser pointers, USB storage drives, and fingerprint scanners with data encryption built in. 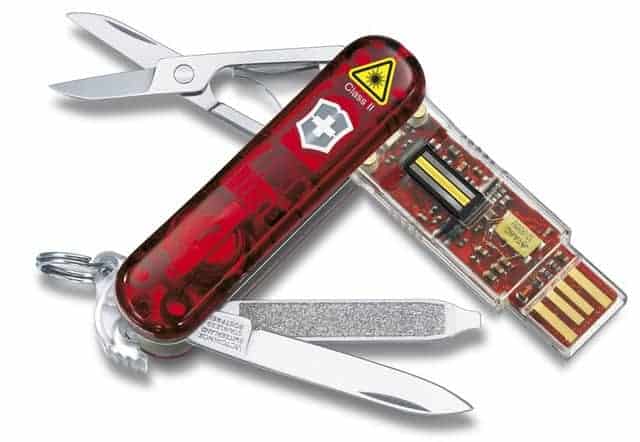 And of course, every single tool from blades to data drives, are foldable or set on springs to disappear when not in use.

Long may the reign of the Swiss Army Knife Continue.

PrevPreviousHow To Sharpen A Fillet Knife
NextSword Customs – Why The Groom Must Always Stand on the RightNext
Bestelling Knives, Saws & Sharpeners