How to Use a Steel Knife Sharpener 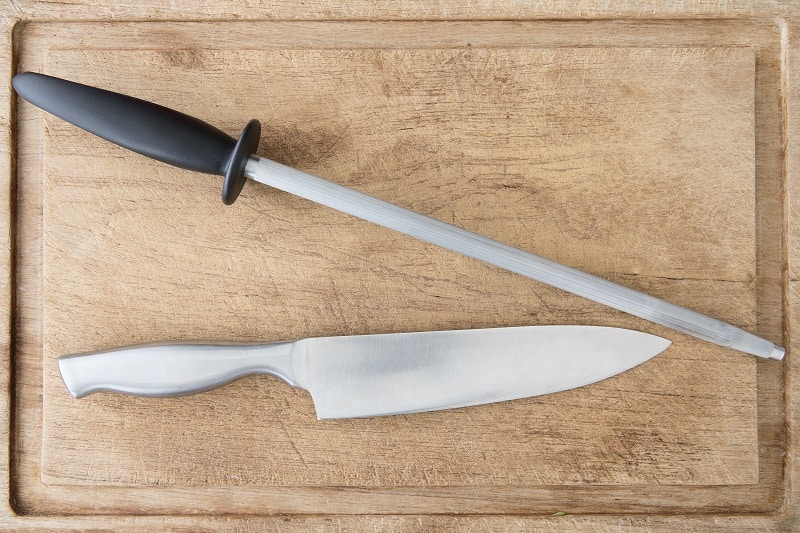 There’s nothing quite like a good, sharp knife. Being able to slice through foods smoothly and quickly can make your prepping that much easier.

However, when your reliable blade starts to become dull, it can quickly turn a quick process into a drawn out, annoying one.

Don’t worry! You can get your knives back into perfect cutting shape with the help of a knife sharpener.

These tools are quite simple and easy to use with just a little bit of practice. Here, we’re going to guide you through how to use one safely so that you can always have sharp blades available.

See our review of the Wusthof Asian Edge Knife Sharpener

What is a Steel Knife Sharpener?

A steel knife sharpener is a kind of steel rod with a handle that you can run your blade along in order to sharpen it when it has become dull.

Typically, it’s a very simple device that you can keep around and use whenever needed.

In addition, this is a tool that is often used after a whetstone. Sharpeners aren’t difficult to use, but it’s worth learning how before you get started with sharpening your knives.

That way, you can get your blades in the best condition without running the risk of injury in the process.

While it might seem complicated, using a steel knife sharpener isn’t a difficult process. Just read through the following instructions carefully and you’ll be a pro in no time.

As you’re getting started, it’s going to be important to hold your items carefully. To begin with, the sharpener should be in the hand that is less dominant.

Rest the tip on a steady surface, and make sure that it is fully vertical. In addition, make sure that you’re holding it as far away from your body as you safely can.

In your dominant hand, hold the knife handle.

You’ll want to make sure the blade is pointing away from you, and that the part of the knife you want to sharpen is pressed against the sharpener.

Make sure not to use too much force, as you won’t need it in order to get the job done.

You will want the knife blade to be tilted at about 22 degrees so that the bottom of the blade is touching the sharpener.

The rest of the knife will be tilted away from the sharpener so that it doesn’t damage portions you don’t want to effect.

Pulling the Blade Along the Sharpener

Start with the base of the knife blade against the sharpener and slowly pull the knife backward and downward along the steel.

Make sure to keep the knife straight. If you’re unfamiliar with this process, you may need to practice it very slowly a few times until you get a feel for the process.

For the most part, you’ll want to aim for about ten strokes on both sides.

Take it as slowly as you need to, and take a look at the sharpness of the blade when you’re finished.

Most of the time, this should be enough, but if the knife needs more work you can continue on at about 5 strokes for each side at a time, checking it after each round.

Tips to Keep in Mind

These tips can help to keep you safe and make the process more efficient.

Keep them in mind when you’re purchasing and using your sharpening steel. Once you’ve gotten a good feel for it, using the sharpener will be like second nature in the kitchen.

Your first step in cleaning up will be to make sure the blade is wiped off. You can simply run the blade under some water, then use a soft cloth to dry it off.

This will help to get any tiny metal shavings off the blade, which you likely won’t want going into any food you use the knife on.

After testing the knife and putting it away, you can also wipe down the area and get the sharpener put away. 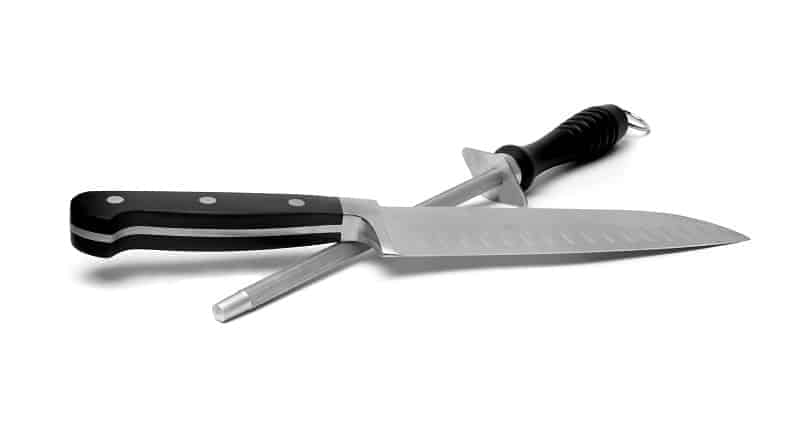 You may find that you need a few different sharpener sizes, but generally speaking the bigger the better.

Sharpeners should be larger than the blade of your knives in order to be the most effective.

Generally, you can get away with using a sharpener that is at least the same size as your largest blades, as your smaller blades will be covered.

You never know when you might need access to your sharpener. Sometimes, just a small amount of cutting can bring down the sharpness on your blade.

When you’re used to handling a knife with decent sharpness, that dull feeling can become pretty annoying.

Because of that, you may want your sharpener within easy reach so that you can quickly spruce up your blade and carry on with the cooking.